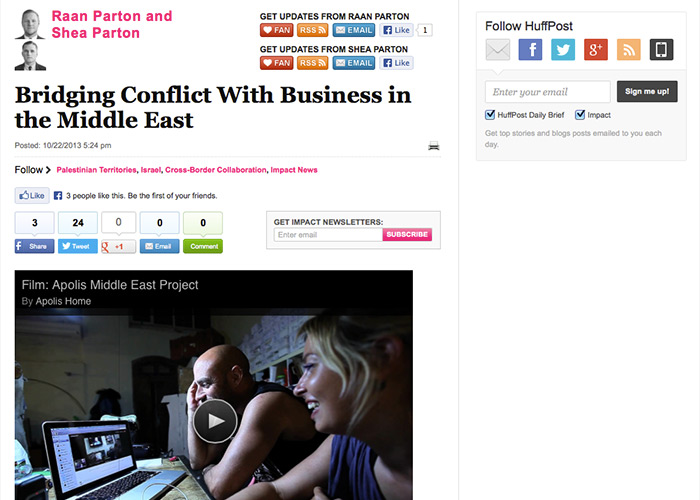 Bridging Conflict With Business in the Middle East

We first previewed this story during our 8-Day Middle East Expedition but it all began two years ago when a mutual friend introduced us to David Shlachter. David graduated from Claremont McKenna College & Harvard University's Kennedy School of Government and currently lives with his wife Oriee in Marin, California. In 2008, David joined the global marketing division at Better Place, a venture-backed cleantech firm that builds electric car infrastructure. During his time with Better Place, David was sent on a two month assignment to Tel Aviv, Israel. The Shlachters two month commitment turned into two years after falling in love with the Middle East.

David, being your classic northern California surfer, enjoyed the culture of Tel Aviv and in between his commitments to Better Place he built a few friendships out in the water. One individual he met while surfing was Shlomy Azolay, a third generation leather craftsman and the production manager of Apolis' Co-op Leather Sandal. The story that David brought to our attention was how Shlomy's business was slowly growing beyond the capacity of his small leather studio. Shlomy wanted to continue focusing on his favorite part of manufacturing, the design process, and through a series of events Shlomy came across Mohammad Altzatari, better known as "HiJazi", the general manager & owner of a second generation sandal factory based in the West Bank's largest city, Hebron.

The details behind this beautiful global citizen story of business bridging conflict is narrated by David Shlachter in the short story that Lonelyleap helped us document. When David first shared this story with us two years ago while he was living in Israel, his desire was to personally document the story behind our sandal and let us package and distribute his footage as an Apolis film. As we all know simple sounding plans aren't always as easy to execute, so fast forwarding two years we have now been able to combine David's footage with Lonelyleap's recent footage from our late May 2013 travels and we are so privileged to share an inspiring untold story of our Co-op Sandal being a cross border collaboration between Israel and Palestine.