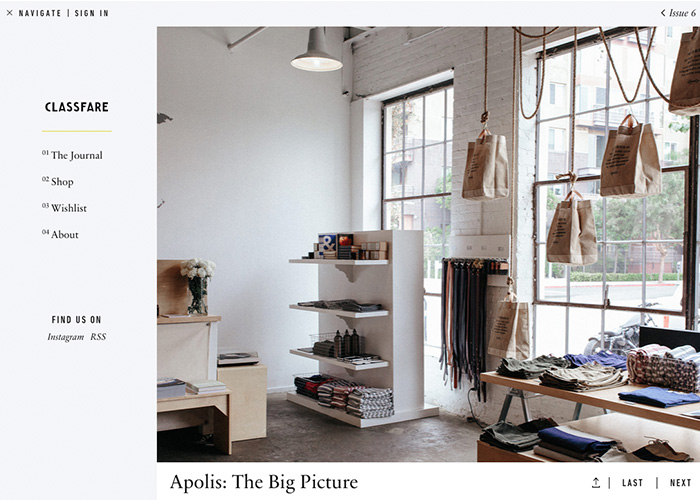 We recently sat down with Shea and Raan Parton, the brother duo behind Apolis Global, in their Los Angeles flagship. We talked with them about their exceptional products (just take our money) and what it looks like to be a profitable high-end manufacturer that puts worldwide social responsibility right at the core of the business.

It’s been speculated that 2015 will be a year of sea-change in corporate responsibility, marking a new tack toward a business ethos that values community and environment as much as (or more than) profits and production. This may sound like utopian idealism. But the idea, and the basis of the speculation, is that many businesses are finding ways to achieve both goals. They are, in fact, finding that the two are mutually beneficial to each other: the better a business cares for the communities and environments it touches, the better (and longer) those communities and environments can support the business and its growth.

In the free market model, business will always pursue profit—it is integral to the model itself. But more and more, companies—even among the world’s largest corporations—are coming to understand that pursuing profits at the direct cost of community and environment is not only unethical, it is highly inefficient. And ultimately, it is self-destructive for the business.

What if the business model itself could simultaneously pursue its own growth and that of society?

The idea of corporate responsibility is not new. But until recently, it has mostly been limited to the efforts of a stepchild department within an organization, tasked with a two-part objective: Part 1, Public Relations; Part 2, Corporate Tax Mitigation. In the current model, these responsibility divisions will always be limited by the very fact that they function as a so-called “responsible” counterpoint to the (presumably) “irresponsible” business with all its rampant consumption. Or so the logic would imply.

Apolis Global is one company that believes those things are possible, and it has landed on a simple model that we at Classfare have never seen before.

Many know Apolis as a maker of high-end apparel and accessories. And so they are. But look a little deeper, and things are far from status-quo. The very name “Apolis” – pronounced “a–pöl–is” – means “Global Citizen” (closely related to the English word “apolitical,” meaning without political affiliation). This idea perfectly captures the company’s approach to making and selling goods.

“It’s really a moniker for our design philosophy of using design to create positive change,” says Raan Parton. But it’s not easy. “When you work with small indigenous supply-chains, it’s difficult to build a model that’s dependable. It’s hard to pair global demand with the capacity and dependencies of these producers.”

To create stability and longevity to their efforts, Apolis developed a hybrid approach. One side is a model of globally-sourced products centered around social and economic impact in disadvantaged parts of the world. The other is focused on high-tech, innovative design and production that favors developed areas capable of pushing boundaries.

In the first model, the company conducts exhaustive research to find and vet production operations that constitute ideal conditions for a project. In a way, it’s driven by the “Teach a man to fish” concept: rather than simply dumping raw cash or material aid into a local economy, the focus is on developing self-sustaining economic growth that will (hopefully) long outlive Apolis itself. But as co-founder Raan Parton says, it goes beyond that. “The reality is most of these people know how to fish. What they don’t have is access to the global marketplace, or the design perspective to know what will resonate with the rest of the world.”

So it’s less about teaching to fish and more about showing where the fish are, how to get there, and what tackle to use. When Apolis finds an operation and collaborates with them on a project, that operation gains those valuable assets. But Apolis gains something too. If the company has done its work well, it gains exclusive access to unique, highly-skilled workmanship and often time-honored techniques that simply aren’t available anywhere else. It also gains access to exclusive textiles and other materials.

It’s less about teaching to fish, and more about showing where the fish are, how to get there, and what tackle to use.

The second category represents a different side of the Apolis commitment to “global citizenship” in that it is a celebration of human innovation and the need to discover. It is also a reflection of where Apolis must sit in the market in order to sustain the model. “In a way it’s similar to Bell & Ross. They set out to make an indestructible watch and succeeded but the only market that would support the product was the luxury timepiece market,” co-founder Shea Parton says of Apolis finding itself in the luxury apparel market. “Apolis has a way of doing things,” he says, and while that method defines the vision of the company, it is expensive. By focusing part of the business on developing high-tech, innovative, and luxurious products, Apolis can stay true to its values and objectives while helping to underwrite its commitment to what it calls “advocacy through industry.”

Who knows what will happen in the broader corporate landscape, or whether or not history will look back on this year as the pivotal moment when business and community wellness started to merge.

Whatever the case may be, it’s inspiring and refreshing to see that it can be done.

You’re both involved in various entrepreneurial projects to grow your businesses and to promote global citizenry. These are not light tasks to undertake, how do you unwind after long days?

Raan: We just did a cool field trip to a fellow downtown B Corporation company, The Reformation. One of the issues discussed was how to prevent employees from getting run down. We don’t think of it as work-life separation. We think of it as a work-life integration. For example, my wife and I opened another concept store called Alchemy Works. It was 24/7 at the start and we didn’t really leave the premises. We didn’t have the support of an entire company like Shea and I do at Apolis. Lindsay (my wife) and I had to learn to be really conscious to at least take Saturday or Sunday off and go rogue or off the grid to recharge the batteries. It’s a little easier in LA versus New York because of the quality of life here – the access to fresh air, the beach scene– it’s easier to maintain a really intense work week and then balance it with off duty activities.